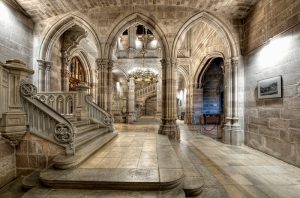 Placed in one of the most beautiful coastal city of Cantabria for his fabulous architectural heritage, we find Sobrellano’s Palace and his Chapel-Pantheon. Both designed by Joan Martorell under the order of the I Marquees of Comillas, the Indian businessman D. Antonio Lopez Lopez. The Palace and the Chapel-Pantheon are conceived today as an authentic architectural jewel, of Neogothic style that they have of modernist the integration character of all his arts.

D. Antonio Lopez del Piélago y López de Lamadrid, I Marquees of Comillas, was born in a humble family of this locality. He remained an orphan to very early age and stood out for his rapid enrichment, in spite of his beginning. He is the man done to yes same, example of the one who triumphed and saw fulfilled the dream of every Indian. In 1853 and 36 years after age he returns from Cuba with a notable fortune. It establishes his company in Barcelona. In 1881 and in his full maturity, he was an owner of the major Spanish shipper; the Transatlantic Company, he had created the Hispanic American Colonial, founding Tobacco General Company of Philippines Island, the Company of Mercantile Credit and possessed a high percentage of the Railroad Company of the North from Spain.

The Palace was realized by posteriori to the Chapel-Pantheon and was designed as summer residence of the Marquees and the Royal Family. The works begin in 1882 and I build it is inaugurated some years after the death of the I Marquees.

At the present the visit to the Palace is guided and takes place for the principal stays of the house showing him the room of the billiards, the dining room, the room of the throne, the library and the museum of the II Marquees. All of them placed in the first plant. Stand out the noble materials used for his construction like the dais of the soils, of oak and ebony or the doors of walnut. The majestic stairs of the foyer have double shot and zenithal lighting, across a transom of windows polychromes and the chimneys which were designed by Cristobal Cascante. 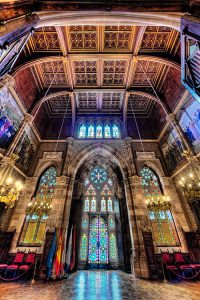 But undoubtedly, the most decorated room is the central lounge or of the throne. One must emphasize his paneling and the walls, decorated with golden bread. The windows of this room were realized in the workshops of Eudald Amigó and they are of great beauty and color. The wall paintings were realized by Llorens i Masdeu and its narrated the most significant events of the marquisate.

Four theme were chosen by the II Marquees and they are the inauguration of the Seminar of Comillas in 1887 for him, the benediction of the Chapel-Pantheon in 1881, the great Naval Magazine offered in the Port from Comillas during the Royal visit in 1881, where there appear the portraits of the family of the I Marquees with the Royal Spanish Family and the loading of the Catalan volunteers in the port of Barcelona, in March 24th of 1869, in the steam “España”, yielded by the Company A. Lopez and Cia like support of the I Marquees to the king in the war against Cuba.