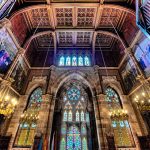 The Chapel-Pantheon was projected as a cathedral on a small scale endowed of ambulatory. It fulfills the function of a familiar mausoleum but also of temple where to celebrate trades in his interior. His construction is previous to the Palace. The project was realized in July of 1878 and the building was dedicated on 28th August of 1881, during the visit of Alfonso XII and the Queen Maria Cristina to the town of Comillas.

The mausoleum placed in the ambulatory, shelters the funeral monuments of the family. The Pantheon dedicated in memory of his brother D. Claudio Lopez y Lopez and his wife Benita Díaz de Quijano show the Jose Llimona’s statues of the “Prayer” and the “Resignation”. The Pantheon of D. Caludio Lopez Bru, the IInd Marquees de Comillas shows the exceptional reclining Christ of the sculptor Agapito Vallmitjana and the Pantheon of Antonio Lopez Lopez, Ist Marqués of Inverted commas, and his wife Maria Luisa Bru Lassus, shows a Venancio Vallmitjana’s relief, designed by Joan Martorell. 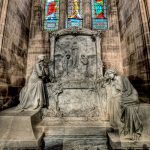 Between the interior ornamentation it emphasizes the altar realized by Francisco Paula Isaura y Fragas’ workshops. The light game provided by the windows polychromes against Eudald Ramon Amigo, stand out on the robust lateral walls of the chapel. The seats, the couches and the banks were designed by Antonio Gaudí.