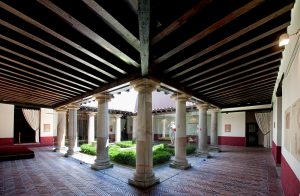 Set in epoch Roman and placed on Juliobriga’s former city, we can visit the Domus Juliobriga. A reconstruction of so called “House of The Firedogs”, excavated in the same city and belonging to a family of upper-middle class. The Center places to 3 kilometers from Reinosa on a hill with a few spectacular sights to the reservoir of the Ebro.

The “city strengthened of July” it receives his name of the emperor Octavio Augusto, in memory of his adoptive father, the emperor Julio César, once perfect his victory against the Cantabrian in 19 B.C. According to Plinio the Old: it’s the only one of nine Cantabrian settlements worth being remembered, due to his urban development and for treating itself about a strategic place for the control of the trade that they were coming from the Cantabrian to the interior from Hispania. His maximum brilliance is during the centuries I and the II century to be left during the second half of the III century.

In 1768 the monk Enrique Flórez identifies Retortillo’s archaeological place as Julióbriga’s former city. From this moment, several appointments and studies happen on the city, emphasizing the first monographic work published in 1885 by Demetrio Duque y Merino. But it’s not even after the Spanish Civil war when there develop archaeological interventions of systematic form for authors like Jesus Carballo, the director of the Museum of Prehistory and Archaeology of Santander (1940-1944), Ángel Hernández Morales (1945), Antonio García y Bellido, the director of the Institute of Archaeology “Rodrigo Caro” of the CSIC (1952 and 1961) and Jose Manuel Iglesias Gil, Professor of Old History of the University of Cantabria (1980-2000).

At the present there has been excavated 5-10 % of his urban tracing. In spite of it, today we known the two principal streets, the “cardum” and the “decumanum”, and part of the Roman forum, placed in the crossing of two routes. In the forum there is the foundation of a small temple dedicated to Jupiter (protector of Rome) and August (founder of the city). In the same place was constructed in the XIIth century a Romanesque Church calling Santa Maria de Retortillo. Near the forum there are situated the remains of a humble neighborhood, constituted by small structures from 15 to 35 m². This building is denominated “casae” or “tugurium” and the family living together with the animals.In front and crossing the actually route to Retortillo stay the “House of The Firedogs” and attached to this one, the “House of The Mosaics” partially excavated. Both have concerning 700 m² and families of medium and high social class. In “The Llanuca” they find the big houses, comparable with the current mansions with approximately 1.200 m². 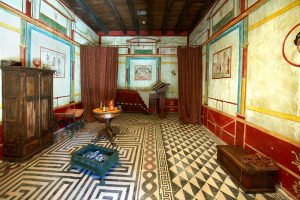 The Center of Interpretation has a permanent exhibition, where there show themselves the most significant objects recovered during the archaeological excavations of the Roman city. The visit begins with the audio-visual one who speaks to us about the historical precedents and the facts that ended in the foundation of the city. Across the existing sceneries, the visitor will be able to know across the visit guide, the principal stays of a Roman house: the atrium (interior court), the lararium (shrine), the culina (kitchen), the triclinium (lounge – dining room), the cubiculum (bedroom) and the tabernae (shops), knowing the principal aspects of the daily life of the Romans.

The visit can complement with the Archeosite Cantabrian-Roman of Camesa-Rebollero and the Center of Interpretation of the Romanesque in Villacantid.