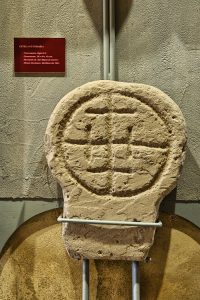 In Cantabria the first Romanesque churches begin to get up of systematic form during the first half of the 12th century. Placed always in the road links, it was used by the pilgrims to go to Santiago de Compostela. To this moment there correspond the buildings from del Mar, Castañeda, San Martín de Elines and Cervatos. This current comes from the family of Sancho III of Navarre, beginning at the end of the 11th century, with the intention of providing churches to the most emblematic places of the Way of Santiago.

Almost all the Romanesque churches in Cantabria were constructed during the reign of Alfonso VIII between 1.158 and 1.210 A.D. Belonging Churches at the beginning of the 12th century as Santillana del Mar, Castañeda, San Martín de Elines y Cervatos are converted by the royal power into collegiate churches for the management and administration of the territory. In fact it is at this moment when a rich proliferation of the Romanesque, as response to the progressive involution and protection of the royal power on the new monastic orders, to the detriment of the rural monasteries and the small rural nobility.This fact joins the intensification of the trade between the coast and the interior, provoking the development of the Cantabrian villages.

The church of Santa Maria la Mayor one in Villacantid is the only church placed in Campoo de Suso that at the present preserves Romanesque vestiges. It surprises his location, on a high hill. The situation of his door next to the apse, it’s strange for moving intentionally from the southern front during the works of extension of the church in the XVIIth century, period to which his tower corresponds. The pointed arches of his door of revenue announce certain influence of the proto-gothic, near a century. The XIIIth to the XVIth century they are the paintings that remain in the presbytery, where the assumption of the Virgin has been represented.

The visit begins with a brief introduction on the foundation and the principal architectural and iconographic characteristics of the church. The interior is endowed of audio-visual that across effects of light and sound reinforce the artistic intensity of the temple, gaining with the technologies most advanced to explain to the visitor, aspects like the different phases of construction of the church, the works of hewn stone and the architectural technologies applied during the Romanesque. 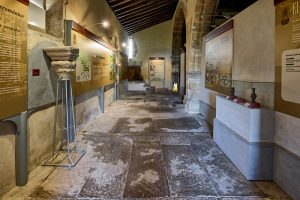 The interactive ones and the audio-visual ones of the center will help us to know and interpret the principal Romanesque churches of the southern valleys, being this center the point of item of a route that leads us to knowing places as San Cipriano de Bolmir or Santa Maria de Retortillo, both placed in the proximities of the Museo-Domus Juliobriga, or collegiate of San Pedro de Cervatos and San Martin de Elines, near to the Center of Interpretation of the Cave Architecture, between others.