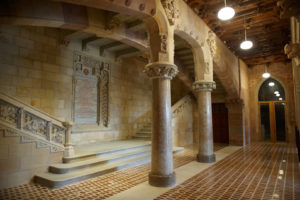 In 1881, Antonio López, the 1st Marquis of Comillas, expressed to the Jesuits his wish to build a secondary school in his marquisate for poor children from both his area and neighbouring towns. The Jesuits turned his proposal down because they thought that Comillas was a town with bad communications and small population. In its place, Father Tomás Gómez Carral suggested building a Seminary for the evangelisation of America.

At a meeting they held, the Marquis insisted on his initial project, but in the face of Father Gómez’s persistence, he agreed to transfer the first amount of funding, which allowed them to start the administrative procedure for the building work and to purchase the hill of La Cardosa.

After the 1st Marquis’s death, on January 17th 1883, his son Claudio López Bru increased his father’s financial support, began to draw up the plans, and placed the first stone on May 20th 1883. The plans were designed by the Catalan architect Joan Martorell i Montells, who worked for the Marquis in Barcelona and in Sobrellano Palace and Chapel in Comillas. The layout of the Seminary was adapted according to the Jesuit proposal, with the church in the centre and on each side a courtyard for the community and the classrooms, respectively.

The Seminary was designed within Historicism, characteristic of the late 19th century, as it used Gothic and Mudejar styles, which were regarded as the true Spanish architectures. The walls combine stone and brick, and ceramic tiles in the Medieval and Renaissance tradition were added to line the exterior of the church. Vaults of curved Catalan bricks cover the head and nave of the church, as well as the cistern, an extraordinary space that still preserves all its aesthetic and luminous essence, below the main cloisters. 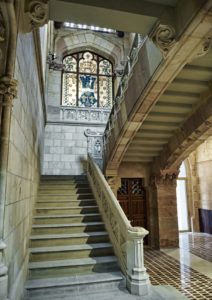 The building work was undertaken by the Catalan architect Cristóbal Cascante i Colom until his death in 1889, when he was replaced by Lluís Doménech i Montaner, who finished the building in 1892. Doménech made some changes to Martorell’s original plans. They were more innovative and imaginative and applied industrial building methods in an elaborate project of efficacy and economy in the materials.

Doménech i Montaner designed the Door of the Virtues, the entrance hall and staircase, with its archwork, stained glass windows, paintings and wooden coffered ceiling, the Assembly Hall, the domestic chapel and the church. For their ornamentation he commissioned the painters Eduardo Llorens i Masdeu, Josep María Tamburini Dalmau and Joan Llimona, the sculptors Eusebi Arnau Mascort and Joan Roig Soler, the stained glass window makers Audaldo Ramón Amigó and Antoni Rigalt i Blanch, and the Masriera & Campins foundry workshop, among others.

It is inside the building that the symbolist language of its artistic forms and elements reach their greatest splendour: columns, altar-pieces, sculptures, paintings, stained glass windows, arches, tetramorphs, anagrams, plant motifs, angels, virtues, animals, sibyls, etc. The great frieze, which like a tapestry, covers the upper perimeter of the Assembly Hall is worthy of special attention. Eduard Llorens i Masdeu painted a solemn vetero-testamentary procession around the Ark of the Covenant, which contrasts the Old and the New Testament, on canvas over boards.

With all this, the Major Seminary of Comillas represents the triumph of Christian Art and is the result of the wise conjugation of all the arts, techniques and symbolist language in a unitary project in which individualities are silenced.